Why is it usually the boys getting into trouble at school? 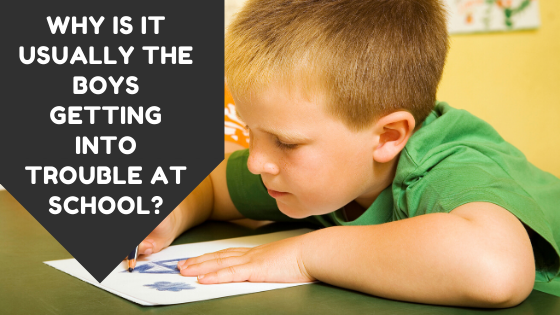 Occupational Therapist and co-Founder of The Kids Coach

Why do boys often fidget, act out or misbehave before the girls in a school classroom?

Why is it usually the boys that get in trouble more often for behavioural issues?

Well, as an OT, we hear this story often. We know that kids are often referred to an OT for help and their teachers will question whether they have ADHD, ASD or ODD. It’s a familiar story we see.

Teachers commonly tell me that the it’s the boys in their class that are the “troublemakers” – the ones that act out, won’t sit still during lessons and don’t behave as well as their girl peers.

Well, there’s a reason for that.

We know that girls brains develop differently to boys brains and this is well documented. Girls’ cerebral cortex and hippocampus areas develop earlier and stronger, which usually leads to stronger language, memory and verbal skills.

But our boys are instead processing more in their cerebellum, which is their activity and “doing” part of their brain. (This is also why boys need to move more during their school days, but I’ll save that for another blog day.)

So in an age where we are asking ALL our kids to sit earlier and for longer at school, our boys can really struggle.

They’re not hardwired to sit there for as long, or as well behaved, as the girls are. It’s not their fault, they’re not being naughty, attention seeking or the “problem student”.

When kids slap the kid next to them, fidget all the time, or there’s that kid rocking on their chair endlessly looking off into space, their bodies are trying to do one very simple thing. Make new serotonin and dopamine, those really important chemicals. Kids bodies can’t store them and movement is actually a really quick way to create some new doses of them.

But for those of you that are teachers, educators, or mums of multiple “getting in trouble boys”, if the boys in the classroom are starting to misbehave for all these reasons, you can be pretty sure that the rest of the class, including the girls, aren’t that far behind them.

So that’s why it’s really important for ALL our kids that we allow them to move. Make the most of their recess and lunch breaks, but also help them move more throughout their days.

Movement brain breaks are a fantastic way of getting kids to quickly move in class, without interrupting the lesson flow. Rockable chairs, having a mixture of different workspaces available and just letting our kids move around more throughout their day is super important not only for their brain development, but also to help them learn well.

The Kids Coach is the world’s premier fitness program for primary schools and their students. Developed by an Occupational Therapist and a Kids Personal Trainer, our videos combine the joy of movement with the benefits of development, coordination, behavior and focus.

Designed with both teachers and students in mind, the program is simple, convenient and easy to use. Schools around the world are using The Kids Coach videos every day in their classrooms for morning fitness, brain breaks, sports and HPE lessons and whole school fitness sessions. It targets many of the developmental needs of children as well as being curriculum aligned.

To learn more about The Kids Coach program and get a free trial, click here.